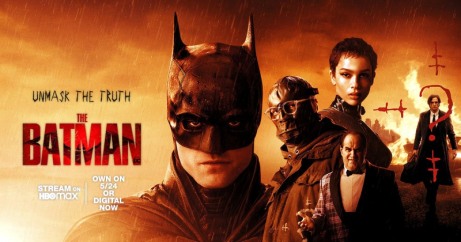 The best thing DC’s cinematic universe can do is to try to distance itself from the MCU at every possible opportunity. Matt Reeves gets this while Zack Snyder clearly did not. 2022’s The Batman proves this point so effectively, one wonders if the entire comic book to movie industry could have slanted very differently for the titans of the industry had pieces like this been in DC’s wheelhouse all along.

The story… well I won’t waste a whole lot of time getting you up to speed on the Bruce Wayne backstory and the movie won’t either. Franchise staples Cat Woman, Riddler, Penguin, Alfred, and Gordon (not quite Commissioner yet) are all here but the film does very little backtracking in its 2-hour 55-minute runtime. Instead, the viewer learns all they need to know based on interaction alone. Thankfully said interaction is quite spectacular.

Let’s start with the first and most wondered-about element of this new era of the Dark Knight – Robert Pattinson donning the cape and cowl. A firm subscriber to the theory that no one managed to fulfill the duality of Bruce Wayne and Batman quite as effectively as Michael Keaton back in 89, I can attest that while Pattinson’s portrayal is different from all of the others that preceded him, it’s certainly no less valid. 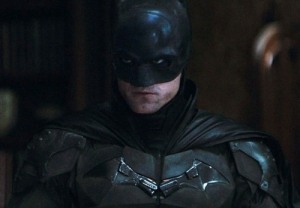 The gravely and shadowy portrayal by Christian Bale and the thuggish, pompous efforts of Ben Affleck are replaced here by an introverted, frail emo incarnation of the billionaire vigilante with the added dash of a penchant for all things mechanical. Pattinson’s Bruce Wayne feels truly alone in the world, if not merely by circumstance, by design as well. Gone is the sprawling backdrop of Wayne Manor and its place a literal tower. Never mind the floozies, glamour and glitz – Pattinson brings a form of awkward seclusion that borders on uncomfortable. Interestingly (and I suspect deliberately), much of his social inadequacies evaporate when he dons the iconic suit. This ends up working well as it is one of few incarnations of the material where the character is in costume far more than out.

Speaking of the suit – somehow Reeves manages to balance a seemingly impossible stack of contradictions in introducing a new, simplified suit comprised mostly of leather, pouches and pads but still manages to inspire intimidation. The gadgets are all present as well but presented in such a way that they never feel cheap or convenient. This is the first Batman in recent memory not limited to lurking about in the shadows to further enhance his onscreen mystique. Here we have a Batman who functions as a literal detective; scouring crime scenes alongside the cops despite the balk of some of them.

Lieutenant Gordon is played to perfection by the consistently brilliant Jeffrey Wright in a dynamic that sees him operating almost as sidekick to the Dark Knight with a makeshift bat signal that works both ways here (Batman can use it to call Gordon as well). 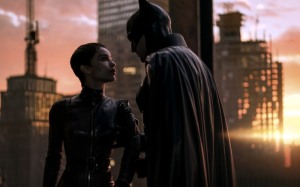 Zoë Kravitz dazzles as Selina Kyle/ Catwoman playing Batman’s best frienemy with the type of character chemistry every film strives for and so few land. As briefly references earlier – the film really doesn’t bother with expository backstory and that holds true here as well. When we meet Catwoman via a rather voyeuristic Bruce, she’s just doing her thing… Like Riddler, Penguin and even crime-boss Carmine Falcone.

They say any hero is only as good as his villains and Reeves stacked the deck to bring out the very best in this version of the Bat. John Turturro’s Falcone and (a nearly unrecognizable) Colin Farrell’s Penguin are played with the type of nuance one might expect from an episode of Sopranos. Stealing the rogues gallery show, however, is a Riddler (Paul Dano) truly worthy of Batman’s moniker as The World’s Greatest Detective. Never mind the ridiculous living cartoon Jim Carry gave the world in the character’s last theatrical outing, this is a Riddler closer in disturbia to Heath Ledger’s Joker with a good dash of cinematic criminal mastermind that was all the rage in the 90s.

The final character that must always be addressed in any Batman incarnation is Gotham City itself. By this point, the cinematic world has been given no less than a dozen takes on the once-hopeful but steadily declining metropolis and this one manages to pick and choose all of the best elements from the ones that came before it. Gotham is realistic in its scope and dark enough in feel to get it right without the claustrophobia of 1989 or the limitless sprawl of the Nolan trilogy thanks in no small part to smart angles and a uniquely appropriate color pallet from cinematographer Greig Fraser.

All in all, it’s difficult to pinpoint precisely what makes 2022’s The Batman work without spreading the accolades across nearly everyone involved. A good piece of cinema is, in a lot of ways, like a symphony orchestra – everyone’s looking at the conductor but the success or failure of a piece is a vastly collaborative endeavor. To that end, The Batman is a gorgeous, frightening, hopeful masterpiece and proof that when it comes to superhero films, sometimes it’s the gritty realism paralleling the world in which we live that serves as the truest backdrop for the fantastical. The Batman is like no other live-action incarnation of the material before it, yet somehow manages to immediately feel like home.