We had a chance to sit down with Richard to get the scoop on what inspired his tales and to learn more about him in general.

Hi Richard, fill us in on the story of you.

Well, I grew up in the San Francisco Bay Area. I’ve been writing science fiction and fantasy since 2008. My speculative fiction short stories appear in Cirsova magazine, Savage Realms Monthly, Broadswords and Blasters magazine, The Weird and Whatnot magazine, Theme of Absence web-zine, Aurora Wolf, and Eastern Iowa Review.

In a previous life, I worked as an appellate lawyer, defending several clients facing the death penalty in California. I’m a member of the Science Fiction and Fantasy Writers of America. I live in the San Francisco Bay Area with my wife and our two cats. My website is richardlrubin.com.

Give us the short pitch about your story “Rebel Assault on Cygni IV” in Cosmic Convocation. (No spoilers, please.) Why do you think readers will love it?

This is an action-packed space opera adventure. In the far future, the totalitarian Rigelian Imperium controls much of the galaxy. A rebel force has risen up to battle the Imperium’s tyranny, but things haven’t gone well. In the aftermath of a disastrous raid to liberate a POW camp, a badly crippled rebel battleship is forced to dispatch a small raiding party on a high-stakes mission to obtain desperately needed fuel from the remote Rigelian Imperium mining colony on Cygni IV.

What was the inspiration behind this story?

There are definite elements of the Battlestar Galactica universe. A ragtag fugitive fleet fleeing an evil galactic empire.

What sci-fi books have you recently been reading and which titles represent your long-time favorites?

I just read The Last Shadow by Orson Scott Card. Not one of Card’s better books, but I wanted to see how the Ender saga wound up. I also reread Star Rangers by Andre Norton, a great adventure story that definitely stands the test of time. My all-time favorite sci-fi novel is Frank Herbert’s Dune.

What are your favorite genres to write in, and are they different from the ones you read? Do you have preferences when it comes to story length?

The genres I generally write in are Sword & Planet, Sword & Sorcery, and Space Opera. I’ve written some flash, but most of my stories are in the 3,500 to 5,000-word range. I’ve never tackled a novel—maybe someday.

Tell us more about your writing process. (What are your writing habits, what working setup works best for you, can you recommend any writing resources and tools?) Would you say you’re a pantser or plotter, and do you do a lot of research for your writing?

I don’t outline, but I do have a mental picture as to how the story will go before I dive in. Sometimes I write the ending first in order to have a sense of direction.

The ending may change as the story progresses, but at least I know I’m not writing myself into a corner. I generally go through several complete revisions and the story may evolve quite a bit from its original conception.

How do you promote your writing, what marketing strategies and tools have worked for you? Which platforms would you recommend to fellow authors?

I maintain a website, and pages on Amazon and LinkedIn. I’ve also attended conventions, such as those held by The Science Fiction and Fantasy Writers of America and our local BayCon event.

Where can our readers find more of your works?

I have that website at richardlrubin.com and I try to keep it current with links to what I’ve published.

My Amazon page is here. 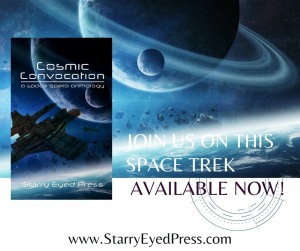 Internationally Publisher of Science Fiction and Fantasy for all ages. View all posts by Starry Eyed Press