We had a chance to sit down with him to get the scoop on both the story and his processes.

Stephen, tell us more about yourself, your life and writing career.

I’ve wanted to be a writer since I was seventeen and took quite a few creative writing classes as electives while getting my history degree and even had a story published by the English department.

While I have a few stories written, this is my first professionally published piece.

Tell us a bit about The Space Tower.

The Space Tower is about a character who lives on a terraforming station on a planet in a faraway galaxy. As his term of service comes to an end and he is about to return to Earth, he focuses on life before he left. I think readers will love it because the character is extremely relatable since we’ve all felt bored with life and have tried to find a way how best to live in our world. 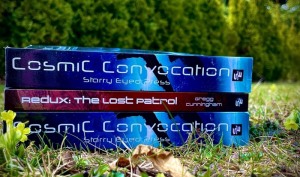 What was the inspiration behind this story?

I enjoy studying the concept of terraforming, and came up with the story pretty easily after re-reading one of my favorite George R.R. Martin stories, “The Second Kind of Loneliness.”

The concept of an homage to that story, but as a terraforming operation, came pretty easily. And then I asked myself, how boring would it be, being alone for that long? And what would you do? After that, everything came together pretty fast.

What sci-fi books have you recently been reading and which titles represent
your long-time favorites?

What are your favorite genres to write in, and are they different from the ones you read?

I enjoy writing historical fiction, fantasy, and sci-fi, which I also read. I also read a lot of history, as I feel it helps inspire my creativity and helps when it comes to world-building.

One thought on “Meet Stephen Lawrence, Author of The Space Tower”

Internationally Publisher of Science Fiction and Fantasy for all ages. View all posts by Starry Eyed Press